Are You Measuring the Things That Really Matter? 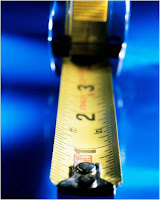 The connection between metrics and peformance is well established. The old axiom "what gets measured gets done" is true. What is less clear is whether most firms are tracking the best performance indicators.