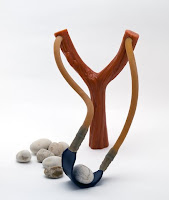 The most amazing proposal win I've been associated with came during my time as corporate proposal manager for a national environmental company. We started at a terrible disadvantage with the client determining that our qualifications didn't even merit receiving the RFP! But since it was an existing client, we were able to pull some strings to get a chance to compete. Then applying some of the strategies I talked about in my previous post, we came from nowhere to be selected from an impressive field.

The opportunity was a multiyear, $30 million operations and maintenance contract for 40 groundwater remediation systems across the country. The RFP had been sent to the who's who among O&M companies. By contrast, we didn't even have a distinct O&M practice, although we had performed these services at several sites as part of our remediation business. Setting up a separate business unit, which we proposed to do in our proposal, would be necessary to offer competitive overhead and billing rates.
This was the backdrop as the proposal team gathered on a Sunday afternoon to outline our strategy. We couldn't win this, we concluded, unless our proposal was radically different from the other firms. Following are some things we did to climb out of the hole we started in:

With long odds we took more chances. Simply following the RFP wouldn't be good enough. We needed to change the game. So we varied from the scope presented in the RFP. We suggested that the best strategy was moving these sites to regulatory closure as quickly as possible. They didn't need just an O&M company, we proposed; they needed a firm that could help them reduce their liabilities and cut their costs while maintaining these sites in the interim. That bold departure from the RFP catapulted our firm from the back of the pack to the leading position.

We leveraged our client knowledge to show how we could build an effective working relationship. While surveys indicate that clients place high value on "the experience" of working with service providers, few firms ever address this crucial aspect in their proposals. We did. Since we knew their preferences, their peculiarities, their systems, their experiences with us and other firms, we were able to describe how our working relationship would minimize their time and trouble. The other firms apparently said little about the relationship with the client.

We delivered the most concise, clear, and compelling proposal. The client told us they were immediately intrigued when they opened the box containing copies of our proposal. It was bound in half-inch binders; everyone else's arrived in one- to two-inch binders (after all, it was a $30 million proposal). They opened our proposal to find 30 amply illustrated, skimmable, hard-hitting pages that described a starkly different approach to these sites than what they had asked for. The other firms mostly filled their proposals with information about their qualifications (which, by the way, were way better than ours!). But we edged them out by focusing on the client.

We planted doubt about our competition. Our initial proposal accomplished what we hoped; it changed the game. The next round, which included both site-specific and cost proposals, pitted us against one other finalist. They were short-listed in large part because their parent company was another consultant. Our scope redefinition had eliminated the pure O&M firms. With our competition now clear, we planted several not-so-subtle-but-discreet questions about the other firm in our second proposal. For example, we noted that we had an integrated consulting/operations team without the inherent conflict of interest our competitor would seem to have (while their consulting firm would be pressing for closure, their O&M subsidiary would be motivated to prolong operations). As we proceeded to final interviews, the client sent us the questions that each finalist needed to be prepared to answer. Interestingly, most of the other firm's questions came right out of our proposal!

Normally I don't advocate writing proposals against such long odds. But there were a number of reasons why we believed this was worth a shot. In this poor economy, your firm might find itself similarly in competition for work where you are at a clear disadvantage. Certainly this is no time to play it safe. Hopefully this story will inspire you to consider what bold steps your firm might take to tilt the playing field to your advantage. The strategies will vary, but the basic principles remain the same: Focus on the client and present your message in clear, compelling fashion.