Focus Not on What You Say, But What Is Heard 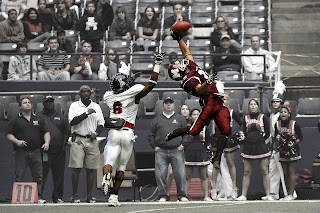 Several years ago, I traveled from southwest Virginia to Dallas to do safety training. I was joined by my client's safety director. When we arrived at their office, the staff there didn't know we were coming. The safety director was quite flustered at this revelation. "I sent an email giving them all the information they needed to be ready for us!" he complained.

"Did you get confirmation back that they had read your email?" I asked.

That is perhaps an extreme example of a common communication problem. We often think we did our job by delivering a message in one form or another. But communication is a partnership. The process isn't completed until the message is both sent and received. Sometimes the message is missed completely, as in my example. More often, it is misunderstood or only partially received.

I liken communication to a forward pass in football. The quarterback must do his part in delivering the pass on target. But whether the ball is right on the numbers or five feet over the receiver's head, if the ball is not caught, the result is the same.

Too often we judge our effectiveness as communicators by how well we think we delivered the message, rather than by the results:
Here's an overlooked aspect of effective communication: The message needs to be delivered so it's more catchable. And the catch should be confirmed. A few pointers:

Getting attention also applies to other forms of communication. When my wife has something important to tell me, she will often ask that I divert my eyes from the computer screen or whatever I'm reading and look at her. It works. If you're speaking to a group and notice people not looking at you, you might say, "If I could get your attention, I'd like to share something important." Simply pausing can also work. Eye contact is one indicator of attention; head nodding is another. Asking questions is a good way to affirm people are paying attention.

People also are more inclined to pay attention when what you have to say matters to them. Start your talk or your written message by giving your audience a reason to listen or read further: "There are some big changes coming. I need to tell you how they will affect your work." Or you might start by asking your audience about what issues within your topic are of particular interest to them.

Establish trust. People generally don't listen to someone they don't trust. And even if they do listen despite the lack of trust, they're more likely to misconstrue the message. So how do you build trust with your audience, especially if you don't really know them?

The first step is to identify with them. Connect to common interests, experiences, concerns. For example: "I have my own concerns about the the proposed changes. I'm going to have to adjust to doing things differently just like you. But I'm convinced these changes are the best option not only for the company, but for us as employees." Identification communicates that you understand where your audience is coming from, at least in part.

The quickest way to establish trust, however, is to demonstrate that you care. How can you show you care? By showing empathy, speaking to audience concerns, using personal language, being respectful. That last suggestion is just plain common sense, but it's less common these days, especially when people disagree. Disrespect breaks down trust, which interferes with the accurate, unbiased reception of your message.

This cuts both ways. Your emotions can substantially shape your message. Your audience's emotions affect how your message is interpreted and received. Pay attention to both dynamics. If you write or speak when angry, for example, expect an angry response. If you're critical, expect a defensive response. On the other hand, people tend to respond favorably to someone who is friendly, upbeat, humble, and respectful.

Not only can your emotions influence how people respond to your message, but your communications should be shaped by your audience's emotions. As an operations manager, I made the mistake of responding to my employees' concern about a downturn in the business by being openly honest about the situation. But that only raised their concerns. I was conveying information without being sensitive enough to how it made people feel, which made the information less helpful. Eventually, after I realized my mistake, I was able to be more encouraging by focusing on the steps we could all take to turn things around.

Use a common, personal language. The technical professions have developed distinct terminologies. These words can clarify and specify for those within that discipline, but they tend to exclude and confuse others. Sometimes I think that exclusion is intentional, perhaps to accentuate our expertise. Yet it often impedes our communication. The advice is to avoid the unnecessary and inappropriate use of jargon.

But speaking a common language is not simply about avoiding certain words. It also includes adopting words—and ways of putting words together—that connect with your audience. The best advice is to use a conversational tone. This means favoring common conventions of everyday language. Take note of how top business authors and speakers convey their message. And, yes, that's appropriate in the technical professions.

Confirm that your message was received as intended. That could be as simple as a return email or a corresponding action that fulfills your expectation. But often it's more involved than that. For example, an affirmative response to your question "You got that?" doesn't necessarily mean you were understood. Hence, my wife will not only ask that I give her my attention but will sometimes request that I explain what she told me to do (and with good reason, as I've been known to misinterpret her instructions!).

If you prefer a less direct approach to seeking confirmation, consider these tips: Rather than you summarizing what you said, ask your audience to take a stab at it. Assign someone the responsibility of providing a written summary of your meeting's outcomes. Request that your employee write a task list based on what you instructed him or her to do. Call the client to confirm that your email or memo was clear and properly understood.

Each of these steps is designed to determine that the most important part of your communication (message reception) was a success. You can't judge that by only evaluating how well you think it was sent (a common mistake). Your audience is the ultimate judge. So be sure you're crafting your messages specifically for them. Because you know what can happen when the ball is dropped, no matter who is at fault.